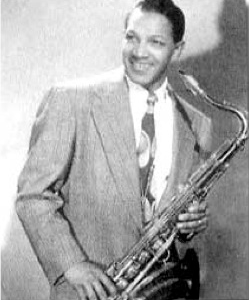 “Illinois Jacquet is considered to be one of the most influential tenor saxophonists in the history of jazz music. Born on October 31, 1922, in Broussard, Louisiana, Jean Baptiste Illinois Jacquet, at the age of 19 on the very first recording of his career, spawned an entirely new style and sound for tenor saxophone. His classic solo on “Flying Home”” recorded with the Lionel Hampton Band at Decca Records in New York City, on May 26, 1942, catapulted Jacquet to international fame and the solo became more famous than the song itself. All saxophonists learned to play Jacquet’s solo, every band recorded it, and people all over the world were humming this most famous solo in jazz history.

Two years later, on July 2, 1944, while improvising with Nat King Cole on piano and Les Paul on guitar for a benefit concert at the Philharmonic Auditorium in Los Angeles, California, Jacquet began to play a range of notes not regularly heard on the tenor saxophone. With an innovational use of harmonics in a creative impulse, Jacquet expanded the upper register of the tenor saxophone by two and a half octaves. By contrasting these stratospheric notes with sudden punctuations of sound from the lowest notes on the horn, Jacquet created the formula for what evolved into Rhythm and Blues Rock and Roll. In the less than three-minute solo, later to be entitled “Philharmonic Blues, Part II”, Jacquet anticipated far into the future and encompassed the blueprint for several generations of saxophonists. This sensational explosive solo created the spark that helped to launch Music out of night clubs and into concert halls around the world. In addition to knowing how to please the crowd with fiery excitement, Jacquet’s broad spectrum of musicianship allowed him to also carry listeners into the depths of their being with his soulfully sensitive mastery of the ballad. He continued to be a star attraction with JATP until the final concert in 1957. Illinois Jacquet grew up on stage, singing and dancing as a small child in front of his father’s territory band in Houston, Texas, the family having moved there from Louisiana before Jacquet was a year old. Formal musical training began in high school on drums and alto saxophone which he played with Milt Larkin’s legendary territory band. Graduation took him to the universities of the Lionel Hampton, Cab Calloway and Count Basie bands. After “Flying Home” with Hampton. He appeared in the film “Stormy Weather” with Calloway. For Basie, he recorded the hits “The King” and “Mutton Leg”; and with his own record-breaking small band he had hits on every major label. For both Aladdin and Apollo, who started in the recording business with Jacquet, he produced a string of hits that quickly elevated them to major record label status. In the 60’s, Jacquet mastered the bassoon and recorded with it; he traveled and recorded as a trio with ‘s Milt Buckner and Jo Jones, and in the late 70’s he worked as a quintet with Slam Stewart on bass and Gray Sargent on guitar. An invitation to lecture to a jazz history class at Harvard University in 1982, led to Illinois Jacquet’s appointment as Kayden Artist-in-Residence in 1983 and 1984, bestowing upon him the honor of becoming the first jazz musician to serve a long-term residency at Harvard. His many subsequent master classes in the ensuing years have earned him the distinction, at that time, of having visited Harvard more frequently than any other artist in any field.

His Harvard students gave Jacquet the inspiration to form his professional big band in 1983, which he maintained until his death, traveling and performing throughout the United States and Europe. He recorded grammy-award nominated “Jacquet’s Got It’ with the band for Atlantic Records in 1987, and Jacquet and the band were the subject of Arthur Elgort’s award-winning documentary, “Texas Tenor, The Illinois Jacquet Story” released in 1991.

The Chestnut Room at The Tavern On The Green became the showcase for The Illinois Jacquet Big Band in the 1990’s attracting people from all over the world and from all walks of life to hear his music. 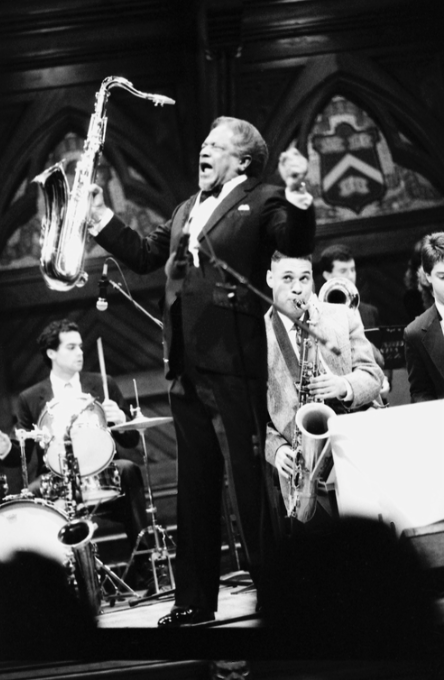 In 1992, when Illinois Jacquet and his Big Band were invited to play for President Clinton’s Inaugural Ball, the President jammed with the and on “C Jam Blues”, playing Jacquet’s gold saxophone. Jacquet had been instructed to bring an extra saxophone along to Washington in order to make the session possible. Clinton disclosed to Jacquet that he had been a fan of his music since the age of ten.

To commemorate Duke Ellington’s 100th birthday in 1999, Illinois was invited to perform as a featured soloist with the Lincoln Center Jazz Orchestra in the Great Performances documentary, “Swinging with the Duke.” In November 2000, Lincoln Center honored Jacquet by presenting him with its Award for Artistic Excellence, making him the fifth recipient of this distinguish award.

Jacquet celebrated his 80th birthday in 2002, with his Big Band’s performance at the Jazz Standard in New York City. On his 81st birthday, the spirit of Cordovan, which permeates the enchanted city of Rio de Janeiro, Brazil, stole Jacquet’s heart. Captivated by the charm and beauty of the birthplace of one of his favorite composers, Antonio Carlos Jobim, and entranced by the enthusiastic adoration of his audience, Jacquet joyfully extended a scheduled one hour concert (Tim Music Festival) slot into two hours of inspired, rapturous music. Ecstatic dancers filled the aisles until the very last note.

On July 16, 2004, Jacquet gave his last live performance as he closed the Midsummer Night Swing Series at Lincoln Center for the sixteenth year. He and his big band had been the final night attraction for this annual series since its inception and this was Jacquet’s favorite engagement. Every year he attracted thousands of people to swing to the sounds of his music, and every year Illinois was transported back to his beloved roots, back to a time when the dancers created the swing bands and the swing bands created the dancers.